If the program is run without any arguments it will print a help message on the terminal, similar to the syntax description.

At least one argument, the name of the script file to run, is required. This single argument can be used when the database connection information is specified in one or more configuration files.

execsql recognizes a SQL statement as consisting of a sequence of non-comment lines that ends with a line ending with a semicolon. A backslash (“\”) at the end of a line is treated as a line continuation character. Backslashes do not need to be used for simple SQL statements, but can be used for procedure and function definitions, where there are semicolons within the body of the definition, and a semicolon appears at the end of lines for readability purposes. The BEGIN SQL and END SQL metacommands can be used to bracket procedure and function definitions instead of using backslashes. Backslashes may not be used as continuation characters for metacommands.

With the exception of the “CREATE TEMPORARY QUERY…” statement when used with MS-Access, the execsql program does not parse or interpret SQL syntax in any way.

SQL syntax used in the script must conform to that recognized by the DBMS engine in use. Because execsql can connect to several different DBMSs simultaneously, a single script can contain a mixture of different SQL syntaxes. To minimize this variation (and possible mistakes that could result), execsql metacommands provide some common features of DBMS-specific scripting languages (e.g., pgScript and T-SQL), and execsql turns on ANSI-compatible mode for SQL Server and MySQL when it connects to those databases.

execsql strips single-line and multi-line comments from the script file when compiling SQL statements to send to the DBMS. execsql does not strip comments that follow part of a SQL statement on the same line, such as:

Metacommands are directives to execsql that can control script processing, import and export data, report status information, and perform other functions. Metacommands are embedded in single-line SQL comments. These metacommands are identified by the token “!x!” immediately following the SQL comment characters at the beginning of a line, i.e.:

The special commands that are available are described in the Metacommands section.

Data import, export, display, and logging all affect the run time of an execsql script. Performance of several of these operations can be affected by configuration settings and metacommand usage.

When the NEW or REPLACEMENT keywords are used with the IMPORT metacommand, execsql first reads the entire data set to determine the data type for each column. This ensures that the data set will be imported successfully. However, the step of diagnosing the data type of every column can take longer than the step of importing the data and inserting it to the database table. If the structure of the incoming data is known, then creating the table first with a CREATE TABLE statement will result in better performance than using the NEW or REPLACEMENT keywords.

execsql will use the fast file reading features of Postgres and MariaDB/MySQL when it can, ordinarily resulting in substantially faster data import than using INSERT statements, as execsql does otherwise. Any specific data handling operation that execsql is required to perform on the imported data before inserting it to the database will prevent the use of fast file reading features. To allow maximum performance:

Changing the size of the import row buffer, using either the appropriate metacommand or configuration setting may affect the performance of data imports.

Changing the size of the row buffer used for data export, using either the appropriate metacommand or configuration setting may affect the performance of data exports. A larger buffer size may be appropriate for large data sets.

Amazon Redshift is built on PostgreSQL 8.0.3 and CockroachDB uses the psycopg2 library for connections from Python. Both of these databases can therefore potentially be used with execsql by specifying the database type as Postgres (i.e., db_type=p).

The following Postgres-specific features that are used by execsql may function differently or not at all in other Postgres-compatible databases:

Geany can be used not only as an editor, but as an integrated development environment, and therefore contains features that allow code to be run from inside the editor, and error messages parsed so that lines containing errors can be highlighted in the editor.

These features can be used to run execsql from within the editor, and if an error occurs, have the error line highlighted so that a correction can be easily made. The result of this is illustrated in the following figure. 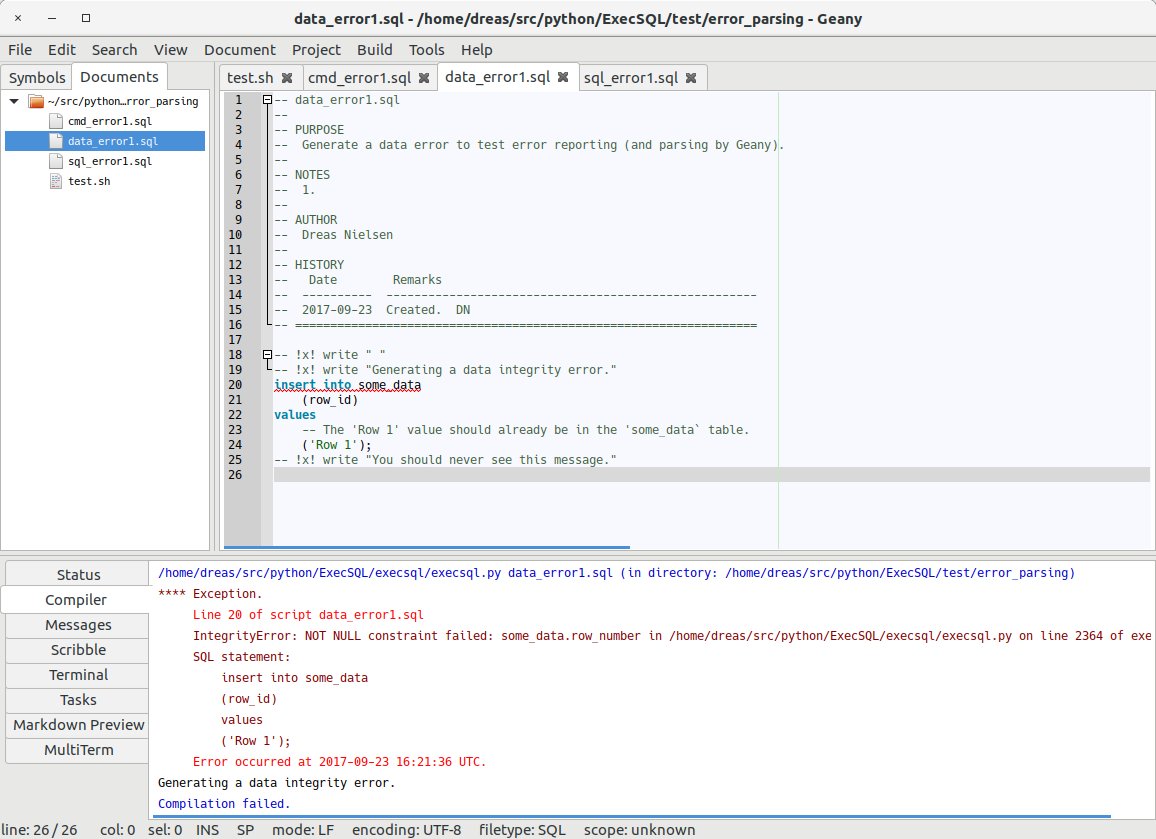 To enable this capability, use the Build/Set Build Commands menu item. A dialog box like that shown below will be displayed. This will allow you to create a new build command to run execsql on the script being edited. You should enter a label for this command (e.g., “Run with execsql”); the command to run, using %f as a placeholder for the name of the current script (e.g., “execsql.py -v2 %f”); and the regular expression that Geany will use to extract the line number and file name out of execsql’s error message–this should be “Line\s(\d+)\sof\sscript\s(.+)”. 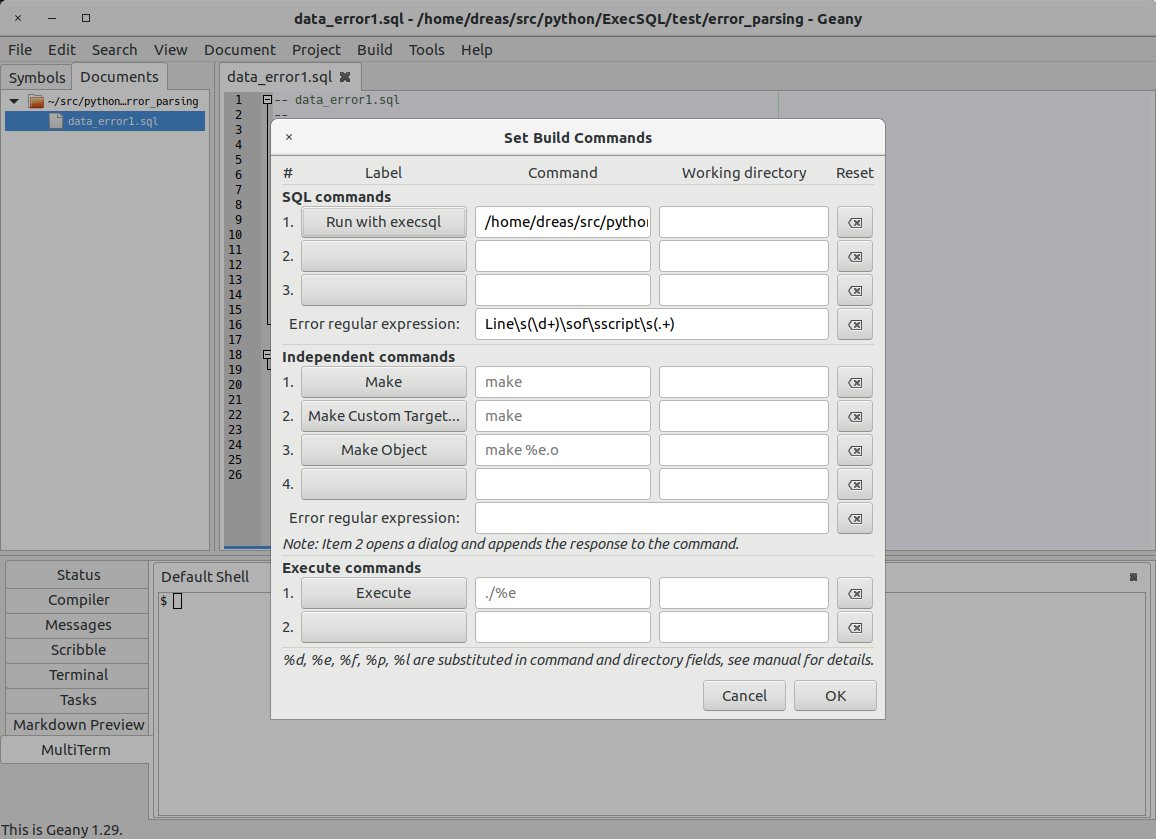 After entering this information, a new item (“Run with execsql”) will be available on Geany’s Build menu. You can also invoke this command with the F8 key.

If execsql will be used with multiple databases, then connection parameters and other configuration information should be provided in a configuration file rather than on the command line. Some command-line options may be included on the default command line, as shown by the “-v2” option shown above. The “-v” option with a value of 1 or higher must be used when running execsql from within Geany because Geany captures console output and does not allow console input.

To find the ‘after’ directory on Windows, on the Vim command line, run:

This will display Vim’s runtime path, which should include an ‘after’ directory (which may not yet exist).

The lines to add to the “sql.vim” file are:

The first of these lines establishes a group name (“XSql”) for metacommand lines, and the second applies a brown foreground (text) color in both the terminal and GUI versions of Vim. Of course, any other formatting could be applied instead of the colors shown above.

An illustration of custom highlighting for execsql metacommands is shown below. 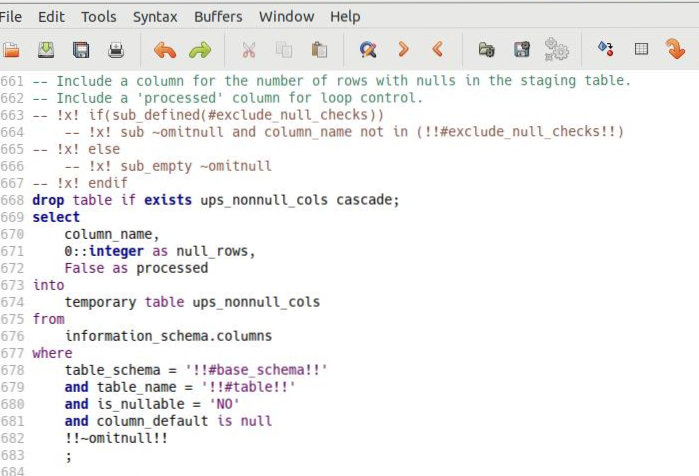 The screenshot above uses the ancient colorscheme. The same color specification works well with the desert-night dark color scheme.

to override the default global file.

On Windows, the syntax highlighting definition file is located under the Bluefish installation directory, in the path

Two additions must be made to this file. In the <header> section, the line

should be added. Within the <context> section, the lines

should be added. Assigning visual attributes to this metacommand specification is done within Bluefish. With a SQL file open, open the Edit/Preferences dialog and use the Editor settings/Text styles section to assign the desired attributes to the “execsql_metacommand” style.

The syntax of the “CREATE TEMPORARY QUERY” DDL supported by execsql when used with an MS-Access database is:

The “TEMPORARY” specification is optional: if it is included, the query will be deleted after the entire script has been executed, and if it is not, the query will remain defined in the database after the script completes successfully. If a query of the same name is already defined in the Access database when the script runs, the existing query will be deleted before the new one is created—no check is performed to determine whether the new and old queries have the same definition, and no warning is issued by execsql that a query definition has been replaced. The keyword “VIEW” can be used in place of the keyword “QUERY”. This alternative provides compatibility with the “CREATE TEMPORARY VIEW” command in PostgreSQL, and minimizes the need to edit any scripts that are intended to be run against both Access and PostgreSQL databases.

The user name for password-protected Access databases is “Admin” by default (i.e., if no other user name was explicitly specified when the password was applied). To ensure that execsql prompts for a password for password-protected Access databases, a user name must be specified either on the command line with the “-u” option or in a configuration file with the access_username configuration item. When the user name in Access is “Admin”, any user name can be provided to execsql.

With Access databases, an ODBC connection is used for SELECT queries, to allow errors to be caught, and a DAO connection to the Jet engine is used when saved action queries (UPDATE, INSERT, DELETE) are created or modified. Because the Jet engine only flushes its buffers every five seconds, execsql will ensure that at least five seconds have passed between the last use of DAO and the execution of a SELECT statement via ODBC. In some cases (possibly related to database size or network speed), a longer delay may be required; a longer delay can be specified with the dao_flush_delay_secs configuration setting..

Boolean (Yes/No) columns in Access databases cannot contain NULL values. If you IMPORT boolean data into a column having Access’ boolean data type, any NULL values in the input data will be converted to False boolean values. This is a potentially serious data integrity issue. To help avoid this, when the NEW or REPLACEMENT keywords are used with the IMPORT or COPY metacommands, and execsql determines that the input file contains boolean data, execsql will create that column in Access with an integer data type rather than a boolean data type, and when adding data will convert non-integer True values to 1, and False values to 0.

If you have an Access database full of queries and you want to export them all to SQL script files for easier searching, to add documentation, to establish version control, to run them using execsql, or for other reasons, create and run the following Visual Basic procedure in the Access database.

Ensuring That a Script is Run Using execsql.py¶

execsql’s metacommands are hidden in SQL comments to allow scripts to be run using other SQL script processors or using GUI tools. However, scripts that make use of IF, EXECUTE SCRIPT, IMPORT, COPY, INCLUDE or LOOP metacommands are likely to operate incorrectly if they are not run using execsql.py. The following code will cause a script to fail with a syntax error from the DBMS if it is run using anything other than execsql.py:

Note that the error message must end with a semicolon.

In a multi-user environment, where more than one person may run a script, and each person has unique database credentials, connection settings should be specified in two different copies of execsql.conf:

If you ordinarily use a DBMS for which a username must be provided, it is convenient to specify your username in an execsql configuration file, for example, in your <home>/.config directory. However, if you need to connect to an instance of SQL Server (or SQL Express) that uses Windows authentication, you must not specify a username when connecting. One convenient way to do this is to create a custom execsql.conf file in the directory containing the scripts to be run against the SQL Server instance, and to explicitly un-set your username in this configuration file. The [connect] section of the configuration file would look like this: